Mt. Nokogiri is a popular Tokyo-area day trip destination, with thousands of visitors riding up its ropeway cable car every year. Upon first glance it may seem imposing and not particularly accessible, as the mountain originally earned its name – which means “saw mountain” in Japanese – due to its rigid profile that resembles a Japanese saw. The mountain was used as a stone quarry starting during Japan’s Edo period (1603-1867) when blocks of stone were transported down the mountain, then shipped off to construction sites such as the fortress of Tokyo Bay, which later became Odaiba. This accentuated the mountain’s already rugged shape by leaving behind dramatic vertical cliff faces that still remain today. 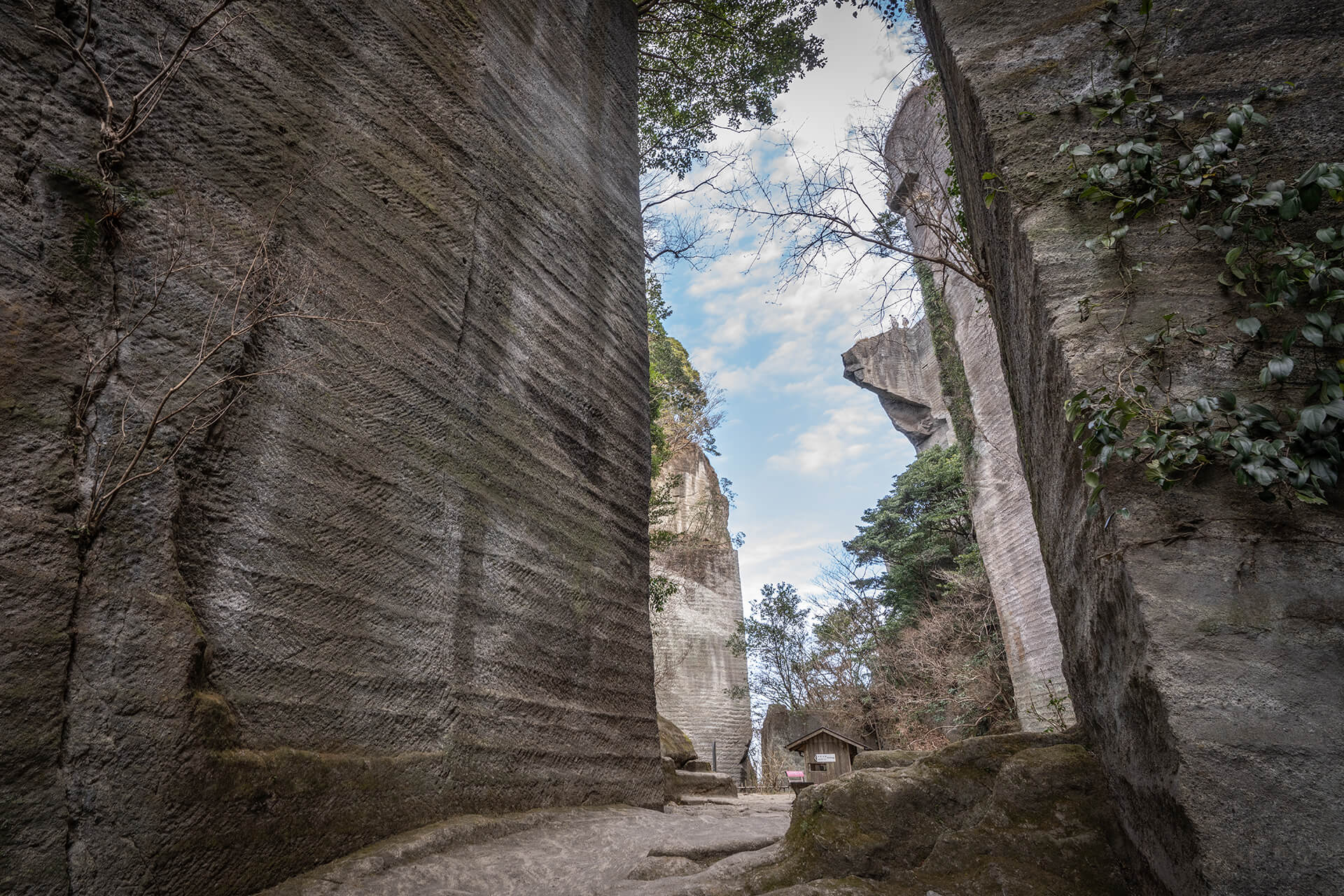 Although there are hiking trails that lead you from the mountain’s base to its peak, most visitors choose to board the ropeway, which takes you most of the way to the summit. For those aged 12 years and above, the cost is 500 yen for a one-way ticket (leaving you with the option to hike back down on your return trip) or 950 yen for a round-trip ticket. For children under 12, the prices are 250 and 450 yen, respectively. The breathtaking scenery from the ropeway ride alone makes the admission fee worth its price, as treetops and stunningly sharp sheer rock cliffs whiz past mere meters away from the glass panes of your gondola. In order to avoid being left without transportation back down the mountain, please note that the ropeway’s operating hours are 9:00-17:00 from February 16 to November 15, and until 16:00 during the winter months. In addition, the ropeway closes once a year for annual maintenance, usually for 7-14 days in January or February.

Once you get off at the ropeway station at the top of the mountain you can begin your hike on a network of trails. One of the trail routes will take you to the mountain’s summit where you can absorb all the natural and mystic views unique to this magnificent mountain. The trails are a bit maze-like, so it may be useful to study the intersections mentioned on the top right-hand corner of this map:

The mountain’s Nihon-ji Temple dates back 1,300 years, and although the main temple building is currently off-limits due to renovations, you can still visit the three main attractions within the temple grounds that draw 300,000 visitors per year: Jigoku Nozoki, Hyaku-Shaku Kannon, and Ishidaibutsu. Everyone wanting access to the temple grounds must pay an admission fee, and those taking the ropeway will be requested to pay it at the West Exit Control Post, a short distance from the top of the ropeway. The fee is 700yen for adults, and 400 yen for children 4-12 years old.

The first point of interest, Jigoku Nozoki, sits a short climb from the ropeway’s mountaintop station and possesses a name which literally means “Glimpse into Hell”; being a rock outcropping which sticks straight out from the sheer cliff face, hanging unnervingly – but safely – a hundred meters above the ground below. Tourists are often found lined up to take their turn at this photo opportunity, as this spot offers both a jarring view of the mountain’s harsh profile and a peerless vista of the stunning natural beauty that surrounds it.

The second point – Hyaku-Shaku Kannon – might be the most impressive in terms of rawness and intensity. It’s a thirty-meter-tall statue of the Buddhist Goddess of Mercy which is carved into the rock face of the stone quarry. Visitors also gather here to stand below and peer up at the likeness of the goddess looming overhead. 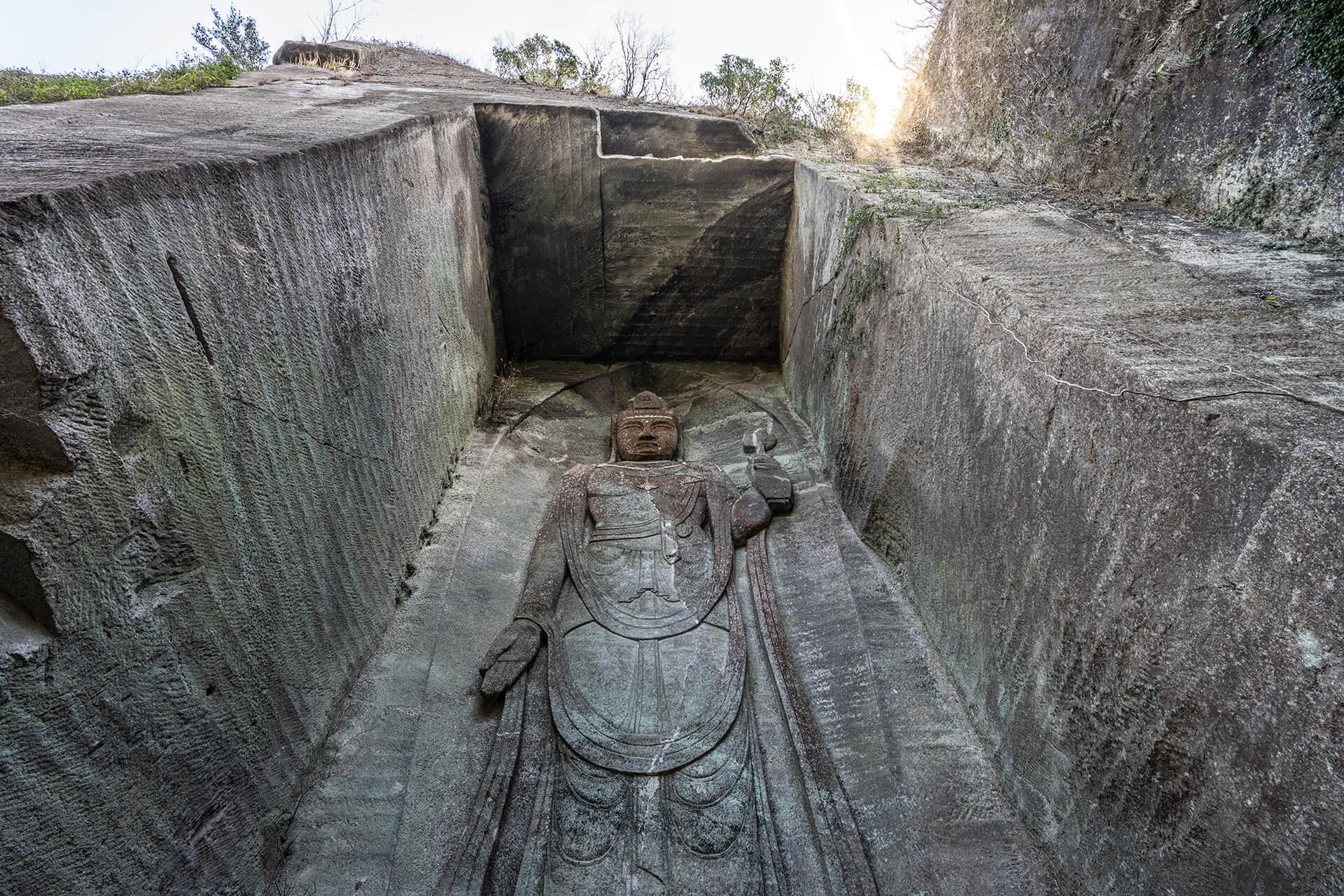 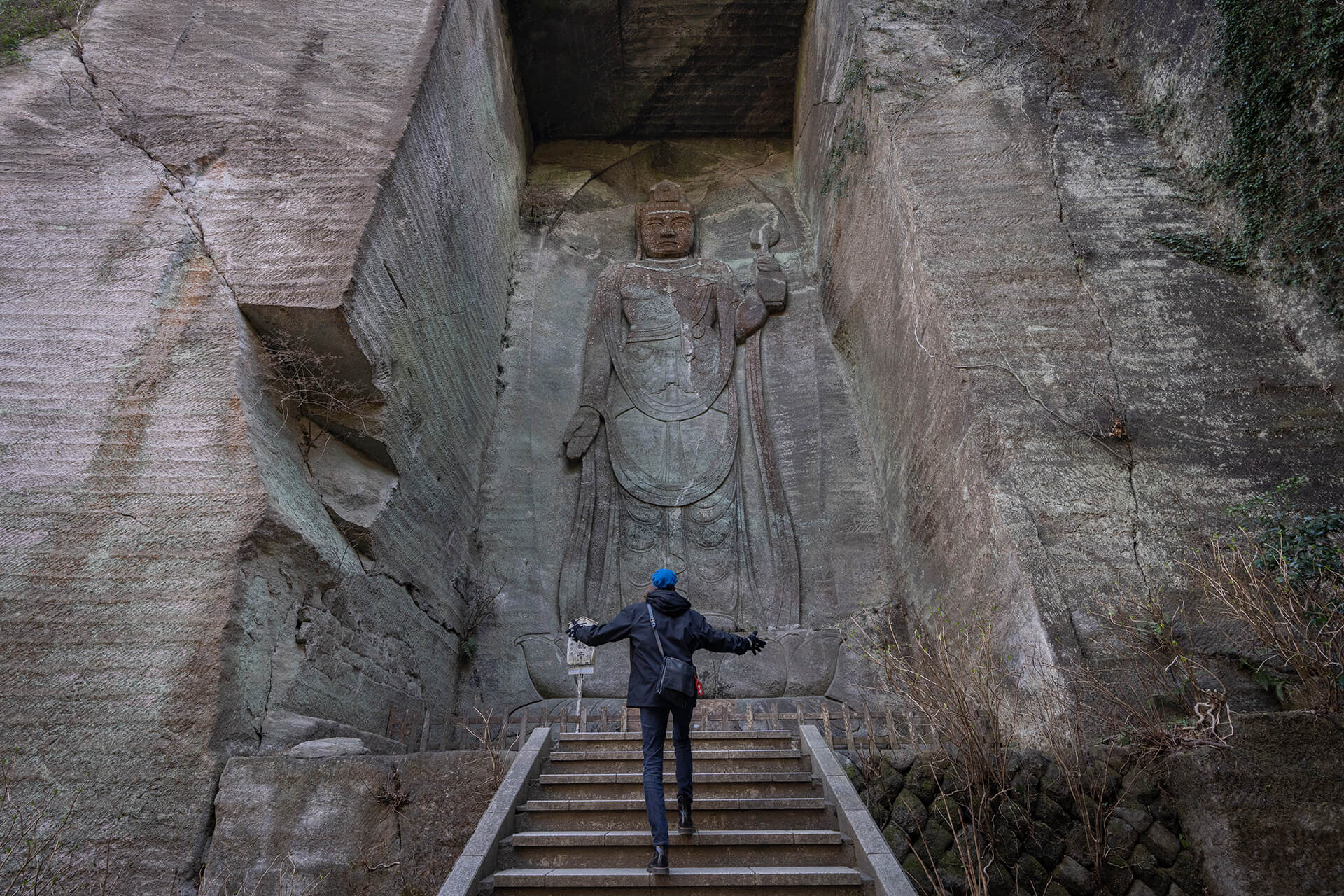 The true prize of the trek is the largest free-standing stone Buddha in Asia which is located on one of the mountain’s slopes. Towering at thirty-one meters of height – including its stone halo – the mammoth sculpture was originally completed in 1783, but was repaired after earthquake damage in 1966. 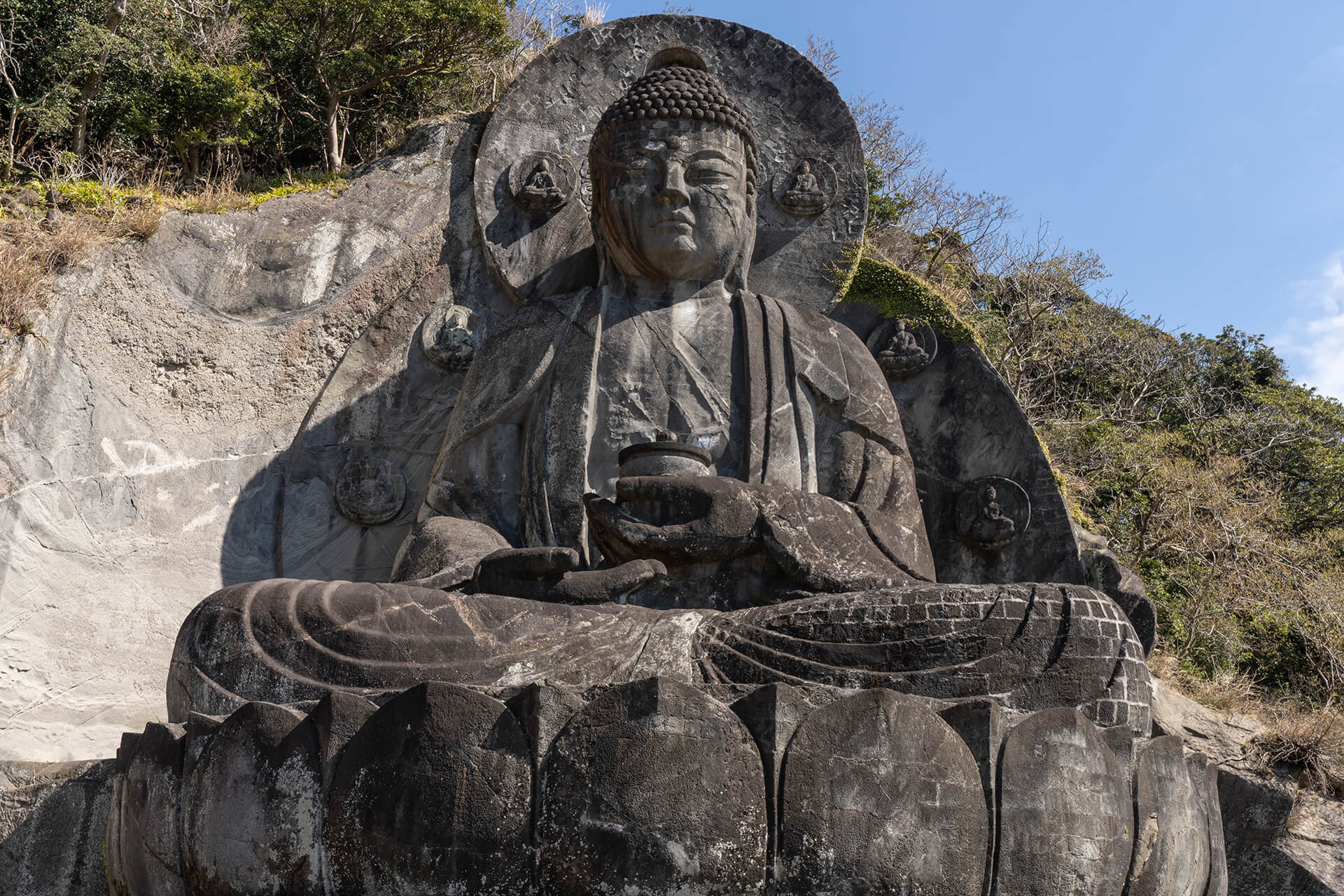 Stone carver Jingoro Hidenori Ono and his twenty-seven apprentices had originally tucked some 1,500 sculptures of the Buddha’s disciples into the caves that pepper this mountain, but only about five hundred of them may be gazed upon today. During a Meiji-era movement which sought to abolish Buddhism – in favor of Shintoism which deified the Emperor – broad-scale destruction of Buddhist art took place on these temple grounds. Thus, many of the “disciple” statues now find themselves headless, or with severed heads plastered back on.

To access the site, the journey takes two hours from Tokyo Station to Hamakanaya Station. From there a ten-minute walk will bring you to the ropeway station at the mountain’s base. From Yokohama, it is easier to access the mountain’s hike by ferry; board the Keikyu Line to Keikyu-Kurihama Station, then catch the number-eight bus (or walk about 2km) to the Tokyo-Wan Ferry Port. Your point of arrival on the other side is a ten-minute walk from the base of the mountain.

Mt. Nokogiri offers incredible views, especially from the rock outcropping known as Jigoku Nozoki (lit. ‘Glimpse into Hell’), which sticks straight out from a sheer cliff face. The mountain is also home to the 1300-year-old Nihon-ji Temple and its Buddhist cultural sites, including two massive stone monuments.