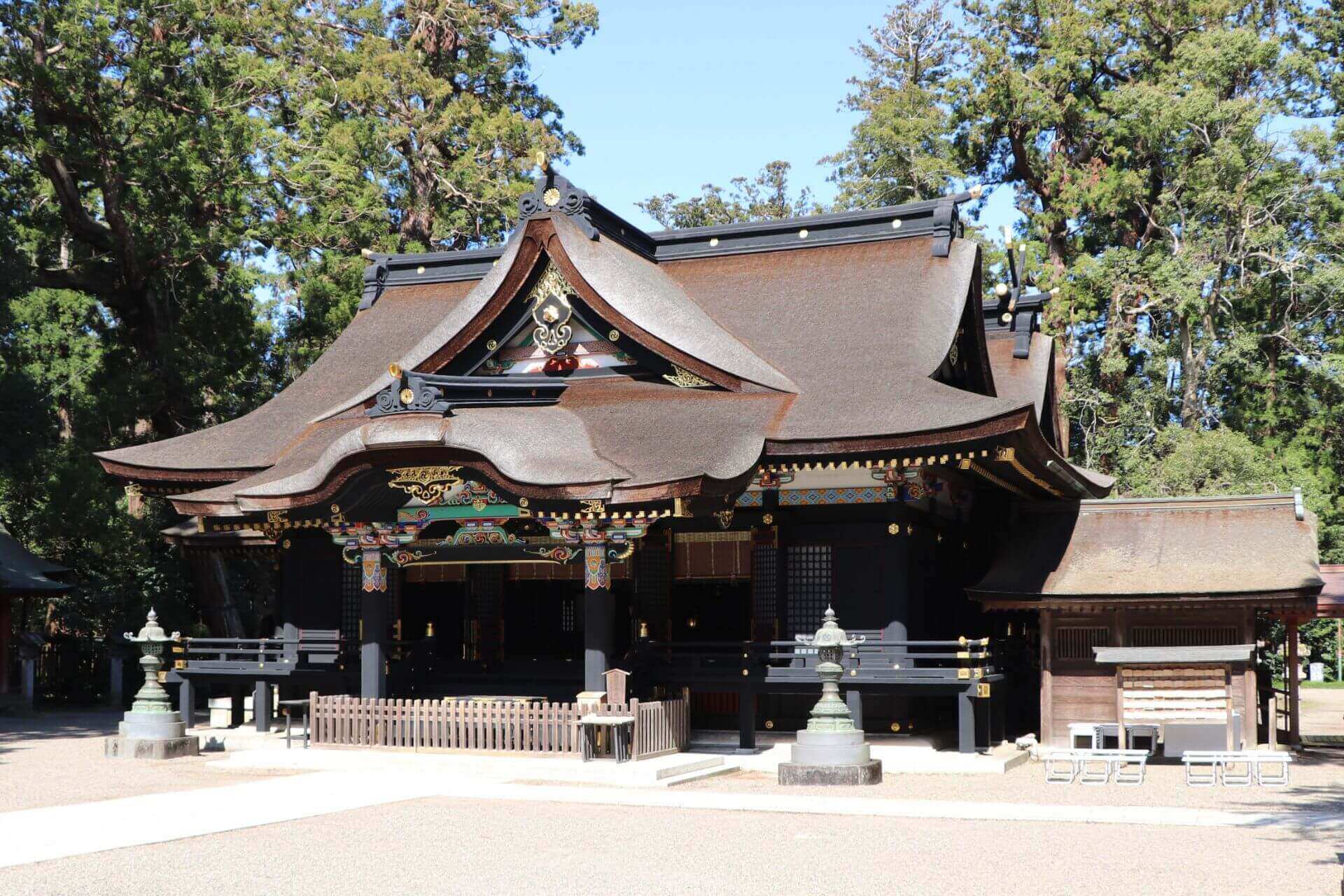 Katori Shrine: A living and beautiful piece of ancient Japan

Among the oldest and largest shrines in Japan, Katori Shrine is an important site in Shinto lore. Along with Ise Shrine to the west, and Kashima Shrine nearby to the east, these were the only shrines to originally have the venerable title of jingu (the titles in Japanese are Ise Jingu, Katori Jingu, and Kashima Jingu). In the old Shinto stories, the land of Japan was surrendered by the earthly kami (Shinto gods) to the heavenly kami after tense negotiation along with a test of strength, and the kami enshrined at both Katori Shrine and Kashima Shrine nearby were the two to achieve this－Futsunushi and Takemikazuchi, respectively.

Shintoism is full of interesting stories surrounding formation of landscapes, and how the country of Japan came to be the way it is both culturally and geographically. Although, Shintoism as a religion is more of a custom these days, and not a devout practice outside of various regional festivals. Nevertheless, important locations in Shinto lore such as Katori Shrine still thrive today. 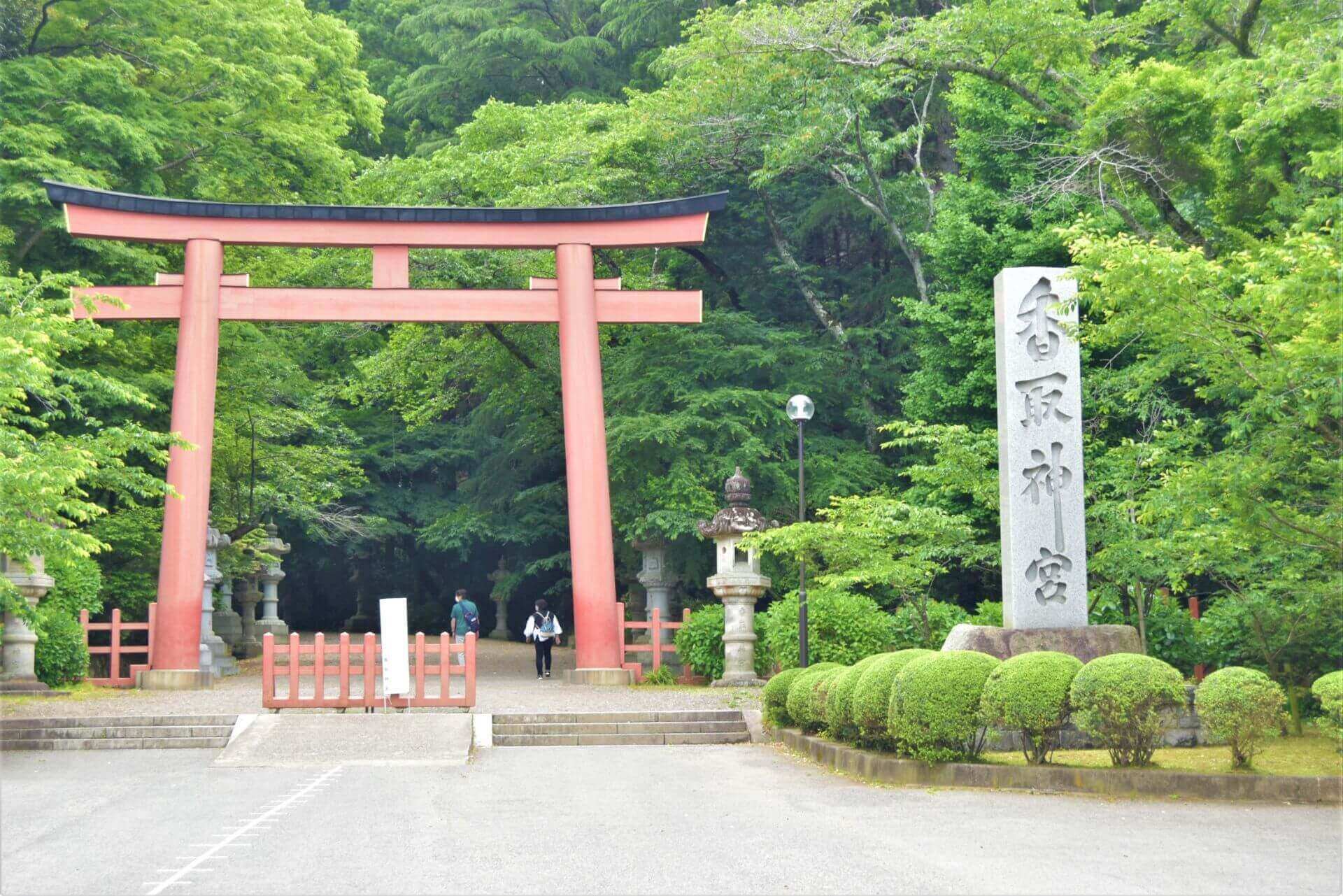 In its heyday, huge influxes of travelers passed through, making the immediate area a booming tourist location with many shops and inns. Many still do traditional weddings here at Katori Shrine in the Shinto style, and the new year season sees huge crowds of visitors looking to make their first prayer of the year. Additionally, regular festivals during the year such as the rice planting festival at the start of April, and the primary festival to honor the enshrined Futsunushi deity in the same month are important dates that see the shrine bustle with activity.

The shrine is situated on a small mountain with a dome-shape, that from a distance has the appearance of a turtle’s shell, thus giving the mountain the name Kikko-san (lit. turtle shell mountain). The brief ascent to the shrine is lined with beautifully dense vegetation and pagoda-style lamps, giving the impression of stepping into another world. And it is indeed very other-worldly, as according to the head priest, Katori-san, the trees and foliage of the shrine have been allowed to grow naturally, as opposed to somewhere like Meiji Shrine in Tokyo which is carefully manicured and maintained. Many habitable areas in Japan are developed, and the trees do not have the chance to grow thick or tall. However, at ancient shrines like Katori, it’s always mesmerizing to see trees growing freely with massive trunks, serving as symbols of the far-reaching history of these sorts of locations. Even with limited habitable space in Japan, some areas deserve to be untouched forever. 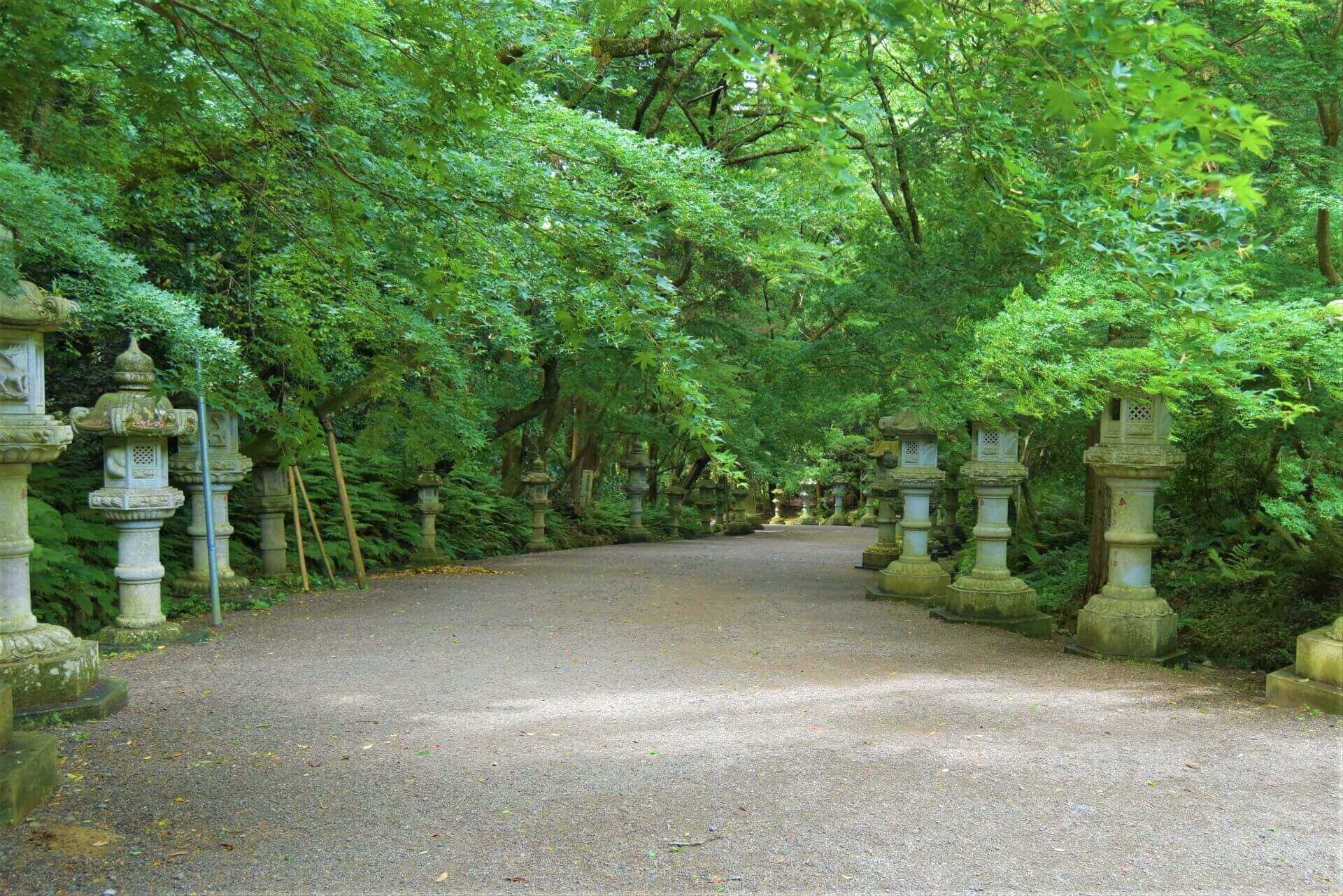 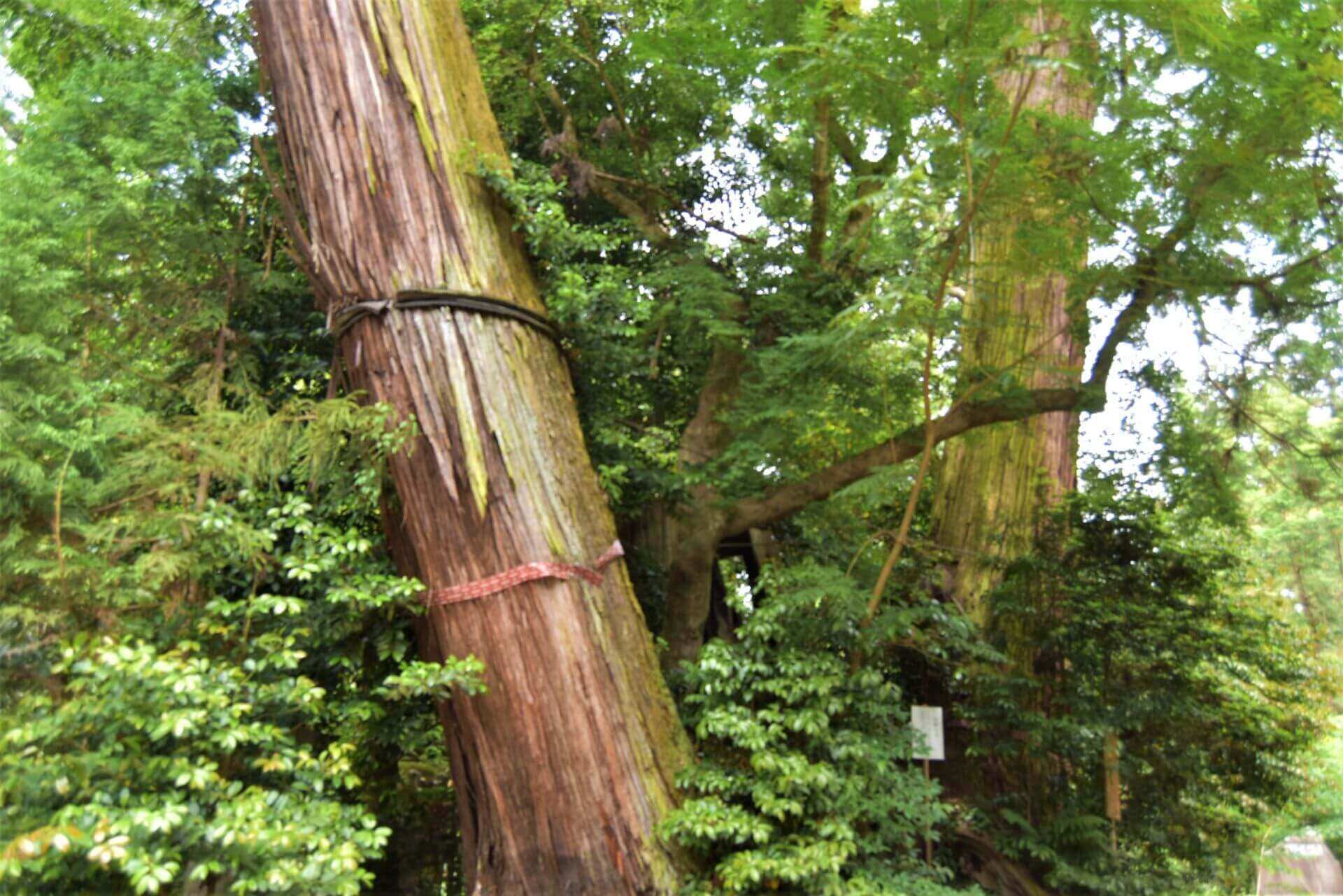 The shrine has a purported history of over 2600 years, and the main building, or honden, has been consistently maintained and reinforced to keep it close to its original form. A stroll around the shrine grounds will give you an appreciation for the architecture and stylistic designs that define Japanese shrines. Further back from the main area, you’ll find the Oku-no-Miya (deep shrine), which is a smaller monument, and also a grave to a legendary warrior Iizasa Chouisai Ienao, who spent one thousand days here in the forests of Katori Shrine perfecting his sword techniques, which would come to be called Katori Shinto-ryu. The Oku-no-Miya has become a place synonymous with starting something new that is of a challenging nature. Many stop by here to pay respects and hope for fortune in their own upcoming difficult endeavors. 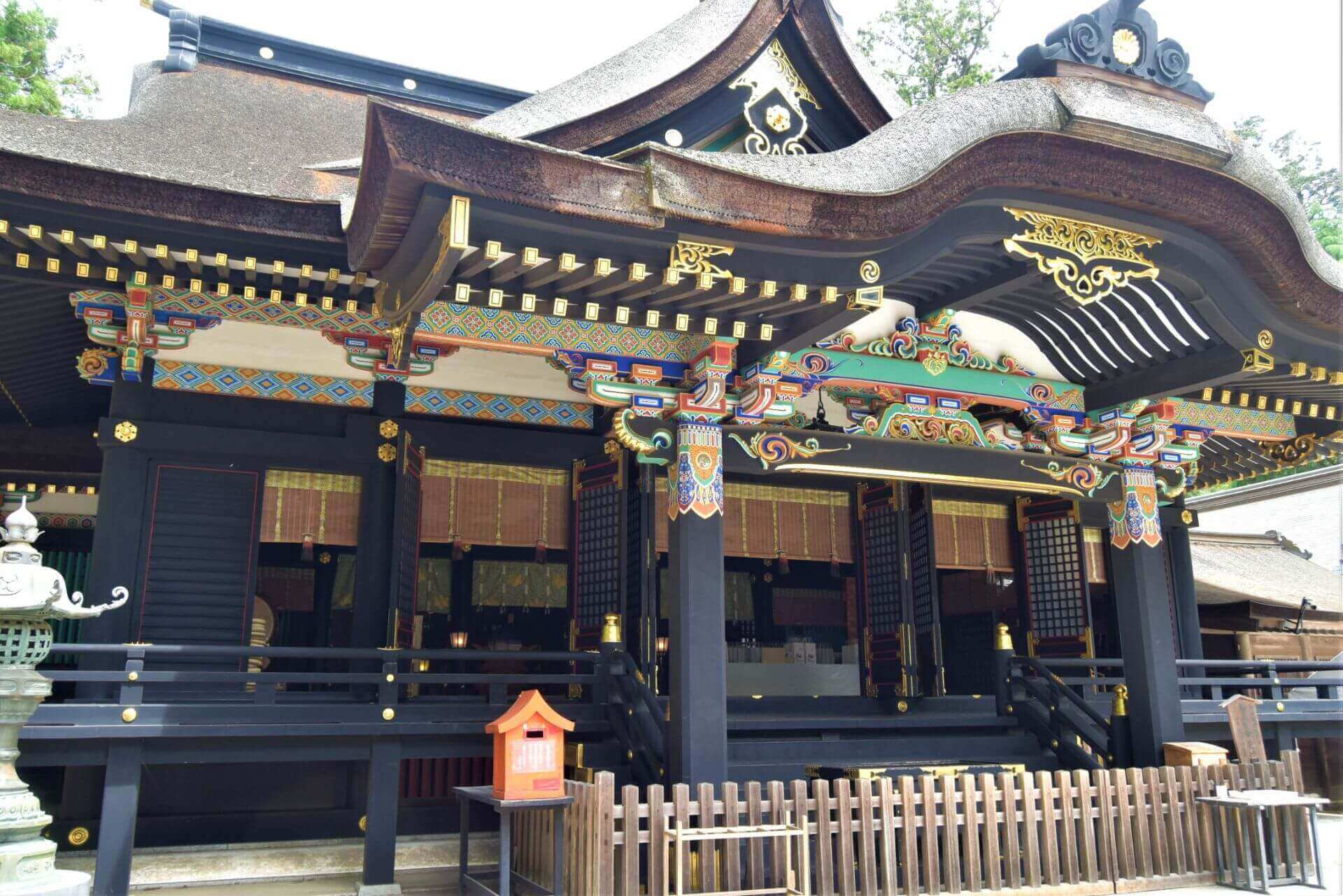 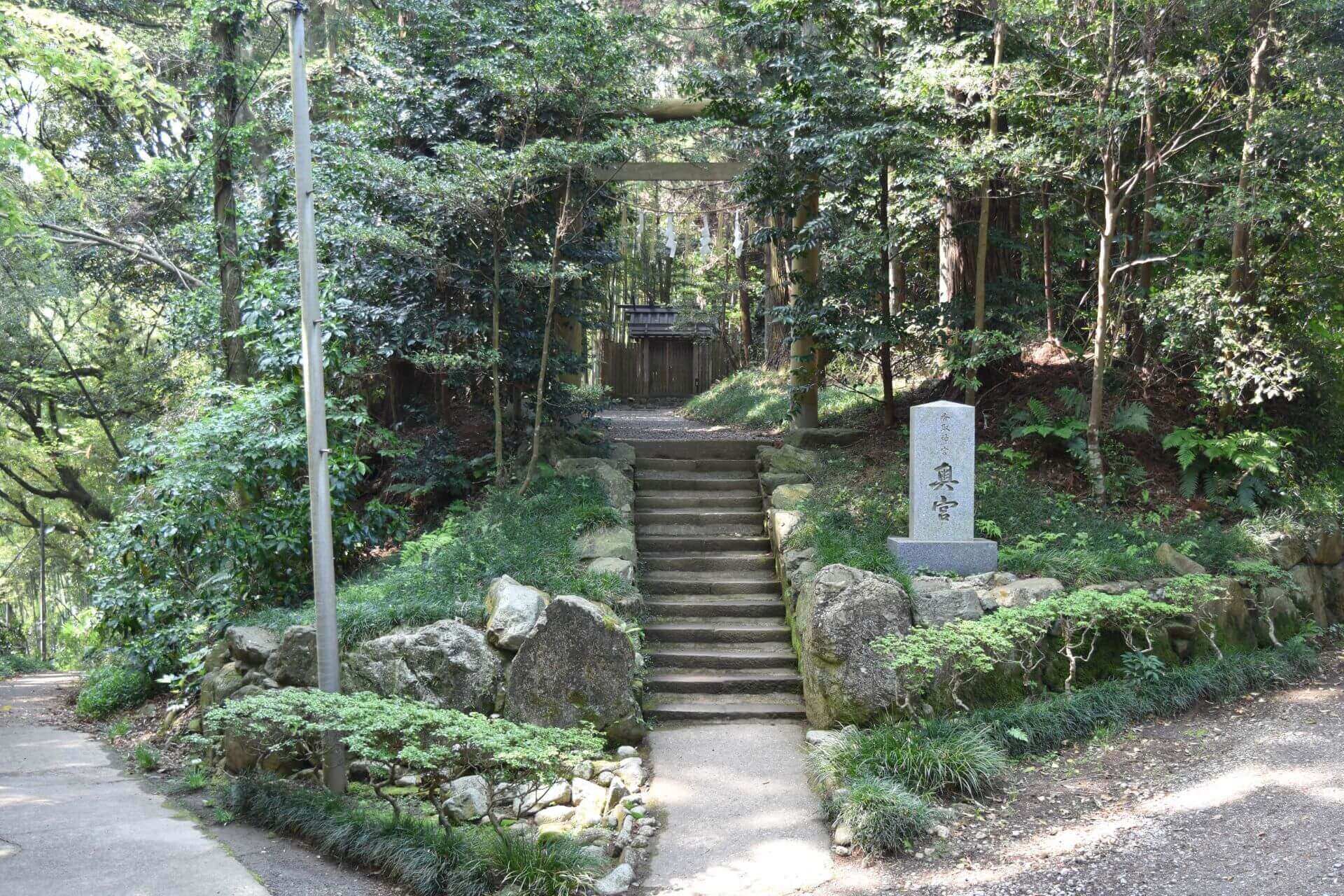 The trip to Katori Shrine was a surreal one, giving a feeling of being back in ancient Japan. Seeing its long history first-hand among the stunning nature reminded me of the kind of Japan we fantasize of after seeing the mystical way it’s depicted in books and media. Come get back to the roots of Shinto, and feel the allure of long-standing Japanese nature and mythology.

This is one of the original three grand shrines in Japan that have the venerable title of 'jingu.' Katori Jingu holds an important place in Shintoism as the place where one of the deities responsible for claiming Japan for the heavenly 'kami' gods is enshrined. The shrine has historically been a hub for travelers looking to pay their respects, or participate in one of the many festivals that take place here throughout the year. The nature surrounding this shrine on a hill is lush and full of old-growth, whisking you away to ancient Japan with its natural beauty and classic architecture.

(About 15 minutes by bus from JR Katori Station)

Nagareyama Honcho, a subtle piece of history to Tokyo’s northeast Ryutetsu Nagareyama Line: A trip to Japan’s past on a classic rail Boso no Mura | Travel to a day in the life of Japan’s past